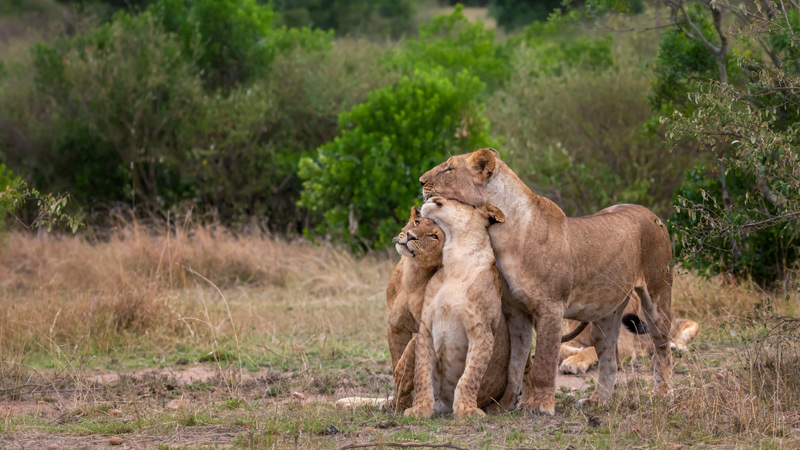 Mating is a natural phenomenon occurring in every form of life. It is one of the basic biological urges known to mankind, and even to all the fauna. For the royalty of Masai Mara and every other jungle in the world, this goes on for about four days in every cycle of 2 years or so.

The typical behavior of lions when they are mating is to separate themselves from their pride, in order to focus on the act of mating. During this act they copulate every 10-15 minutes and repeat it as often as physically possible for the male. Furthermore, if the lioness continues to be in heat, she freely courts the other males in the pride. The pair usually goes hungry during their mating ritual, thereby showing that their main objective is to concentrate primarily and solely on the act of satisfying their needs, and they stay hungry until an opportunity presents itself in the form of some unwary victim.

On this particular day when our group was out for the days’ safari, we had a unique opportunity of being an audience to the psychology of the wild; to understand how the need to copulate is so innate and primal even in the wildlife.An overcast evening complete with mild showers saw a lion pair enjoying a royal time—a King on a day out with his Queen. After watching the lions copulate for a few rounds, the group was fascinated at observing how full of energy and vigour the pair still had.Something that was much more interesting to notice, however, was howeven while they were still in the midst of this act, the lioness did not miss a beat in sensing an impala fawn’s presence a small distance away in the grasslands from where they were.It was indeed marvelous how nobody in the group, or even the poor fawn itself had realized the predator preparing itself for the kill. The lioness was ever so steady as she quietly stalked closer to her prey—with her eyes and head locked in on the impala fawn. Such skilled was her approach that the poor fawn was completely unaware of her presence until the last minute, and as soon as she was in striking distance, she went in for the kill—much like a bullet going off from a barrel!

It wasn’t a long chase, however,because as the lioness got closer to the escaping fawn with every step, the fear of death in the eyes of the fawn was very transparent and visible to be missed by any spectators to this hunt. It was obvious that the generations of evolutionary perfection in hunting skills, muscular and balanced structure and impeccable speed of the lioness left no chance of escape for the small and weak fawn.

In a pride of lions it is mostly the lioness that goes out for a hunt and completes every kill with perfection. But in spite the lionesses’ hard work, it is the lion that getsthe first share of every meal. Traditionally following this implied protocol, the lioness was first supposed to present the meal to the lion so that he could satiate his hunger first and leave the lionesses with just the remains, but today seemed to be a slight violation of this. The lion, obviously still fixated on satisfying his primal urge was not interested in taking a bite of his fresh meal. This time the king let his queen lead the way. While the lioness was teasing her partner by beckoning him to her by whipping her tail, she was actually trying to show the king that she was in-charge in that situation, and whenever the male came close, she’d run away; egging him on to follow her.  But, the saddest or the most spine-chilling part of whole scene for the group was noticing how the lioness hadn’t really killed the impala fawn. She had just clenched her teeth around its neck, and this obviously was causing tremendous agonizing pain and distressto the fawn as it was making him emanate high pitched squeals whenever the lioness made any movement.

However, with the kill clenched in her mouth that had the possibility of feeding her empty stomach, her priority was still intact. And so was the lion’s—they were here to mate. The male had made it clear that he didn’t even want to eat any food.  Soon after, the lioness put the partly killed fawn aside and lay down, inviting the male to mate with her, and accepting her invitation he finally moved towards her—this is the conventional way in which the female invites a male lion to mate.

After copulating for one more time, the lioness then decided to enjoy her meal. While we were all anticipating and waiting for when the lion would turn aggressive and go on the offensive and grab a bite, to all our surprise, he simply sat just beside her and watched her devour the fawn with a great big appetite.

That day we understood that even evolutionarily advanced species such as lions that are so intelligent, tactful and organized, are still so deeply driven by their biological urges. At the end of the day we could safely say that it was truly a great spectacle that we were gifted to witness in the African savannas. It was indeed interesting for each and every one of us to learn just a bit more about the ways of life—about something that is so personal to every human and animal alike.